In his opinion, even though research shows most NRIs plan to return to India to retire, they may still be better off building a globally-balanced and diversified investment portfolio.

As part of the 25 million-strong non-resident Indian diaspora that stretches across the globe, I have for many weeks now been closely following coverage of the Indian elections.

The landslide victory of the Narendra Modi-led NDA Alliance has shown that, as is so often the case, the economy has been an important factor in the outcome. Voters are obviously of the opinion that a Modi-led government will be more successful in its stewardship of the economy than the rival UPA party.

Having left the country myself to make the most of opportunities abroad, coupled with the potential to earn a higher salary and therefore to save more, I can understand the motives of the majority of India’s 814 million eligible voters in electing what they see as a strong party that is most likely to bring about improving economic fortunes domestically.

It is a time of renewed hope for the future of India, yet there remains some uncertainty. It will be interesting to see the policies that will be pursued and how effective the new government will be in implementing them.

While the election result may be of less immediate impact for Indian expats than for their friends and families at home, it is natural that many NRIs will have kept a close eye on the outcome. Recent research commissioned by Friends Provident International found many NRIs plan to return to India to spend their retirement there. Furthermore, Friends Provident International’s research suggests that most Indian expats keep the majority of their savings and investments in India, perhaps retaining only a little of the income they earn overseas to meet the costs of living in whichever expat hub they are located. As an Indian expat myself, I can understand why they do this; India is their home country and most NRIs intend to live there again one day.

Nevertheless, I am a firm believer in the importance of building a balanced and diversified investment portfolio; geographically and by asset class.

Remitting money to India from overseas exposes my savings to currency fluctuation and other related risks, such as high inflation. Though dirham-rupee exchange rates have been good in recent years, anyone sending money home will have suffered from the effects that a depreciating rupee will have had on their savings. Despite high interest rates in India, high levels of inflation marginalise the benefits.

Then there is the broader question of the Indian economy. Of course, I am hopeful the new government can right the country’s finances, but this is no simple or quick task. QE tapering in the US has affected India and, if and when US interest rates rise, we are likely to see capital flow out of the country, with domestic borrowing costs increasing as a result. This effect is being seen across emerging markets and volatility in these economies and currencies will not disappear overnight.

And what if, as an Indian expat, you decide not to return home? What if you move to another country? What if you want to send your children to be educated overseas? What if you need the money in your new country of residence?

While you may have saved what you consider to be enough in India for educating your children abroad, for example, there may be a shortfall when the time comes to pay the university fees outside of India because of the rupee’s volatility. This risk – and many others - may be mitigated to an extent if your savings are diversified geographically.

In my opinion, having a diversified investment portfolio both inside and outside of India may be a sensible step. It can help me to protect my money from extra layers of currency risk, interest rate risk and inflation risk, as well as domestic, economic and political factors that could have an impact on capital.

As a proud Indian, I hope the new government will help our country go from strength to strength, both economically and politically. And as a financially prudent expat, I know it makes sense to diversify my portfolio by investing both inside and outside of India. This means that a percentage of my investments are held in a stable currency and with easy access, until I need to have them with me back at home. 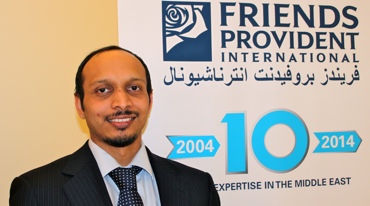 Taher Fakhri's blog Taher, a chartered accountant from India, has over 14 years’ experience in the insurance sector. He specialises in risk management, business analytics, regulatory compliance and internal audit and has worked extensively in India, the Middle East and USA.